Are you conscious of your "Unconscious bias"? - Bespoke Recruitment

Are you conscious of your “Unconscious bias”? 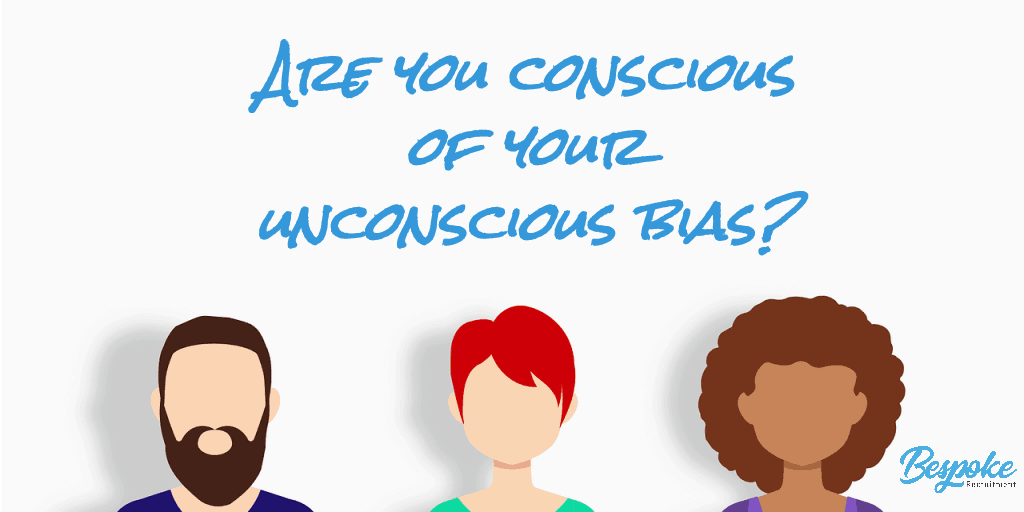 Unconscious bias, what is it?

Unconscious bias is a kind of social stereotype we build about certain individuals or groups of people, formed outside of our conscious awareness.  Many of us make these judgements every day but, as the name would suggest, we are often totally unaware of making them.  Regrettably, it’s all too often found in our workplaces and is prevalent in many of our recruitment processes. In recruitment, nobody likes to think that we demonstrate any kind of bias, either conscious or unconscious. In truth, the reality is we probably have all demonstrated a certain degree of unconscious bias at some time or other. Recruiters and Hiring Managers often review high volumes of CV’s for every campaign,  our minds often make decisions about those candidates before even our conscious is even aware of it. Unconscious bias can often have a critical impact upon our judgement and in many cases ultimately lead to a poor hiring decision. Without knowing it, we jump to conclusions based upon assumptions and prejudices in our minds.

"Bias" comes in all shapes and sizes

Bias can often be found in many shapes and sizes. Common biases are often made upon the basis of Gender, Accent, Race and Age. Regrettably for many, these are often made in a more conscious rather than unconscious state. Unconscious biases are often harder to identify but this doesn’t mean they should be paid any less attention than our conscious ones. Typical forms of unconscious bias include Affinity Bias (Favouring those with similar attributes to our own), Attribution Bias (How we perceive their actions), Beauty Bias (Yes, this exists, based on people’s physical attractiveness) and Confirmation Bias (Searching for evidence to back their opinion, rather than the wider picture).  Any bias, unconscious or otherwise often has a huge impact on the way we conduct our recruitment campaigns, raising our awareness of such bias is a must of we are to drive forward a more diverse workforce.

There are several ways that Unconscious Bias can affect your recruitment process. Ultimately it can result in your recruiting someone who isn’t “The best person for the job”, and guide your choices away from the most qualified candidate. We are living in such a diverse population these days that it should be the case that our work environments reflect this. It is widely reported that a more diverse workforce often leads to a higher-performing team.  The greater the ethnic and gender diversity, the more productive and often more profitable a business can prove to be. There is, of course, a moral argument to be voiced here too.  As recruiters and line managers we have an obligation to ensure our recruitment processes offer a fair and level playing field to all potential applicants. When it comes to workplace discrimination, we are guided by various pieces of legislation such as The Equality Act 2010, protecting employees against factors such a Age, Race or Gender discrimination. When it comes to unconscious bias, it's often a little harder to establish the boundaries but doesn't mean it deserves any less attention when it comes to recruitment.

First things first, we all have to acknowledge it exists. It is very easy to take a, “Oh well, I’m completely fair when it comes to recruitment” approach. Understanding, acknowledging and talking about potential prejudices is the first key stage to removing any such practice from your process.  There is absolutely no point in taking a denial stance, Unconscious Biases are everywhere, everyone posses them and identifying your own is often the first step to tackling the issue. Instigating conversations with work colleagues and peers about the subject matter is key.

Believe it or not, the vocabulary you use within a role specification can often include some stereotypical Gender-specific content. Certain words and phrases are thought to carry certain masculine or feminine perceptions and therefore unconsciously may lead to the document having greater appeal to a specific gender. It’s reported than the use of language such as “competitive” and “determined” would appeal to the masculine nature whilst, “collaborative” and cooperative” carry more appeal to the feminine mindset.  There are many pieces of software available on the market to aid the construction of unbiased role specifications. Did you know, for example, Microsoft word has a filter within it’s “Grammar & Refinement” settings that allows you to set up filters based upon inclusiveness factors such as sexual orientation, age and gender, Click here for a quick guide.

Reviewing a CV should always be based upon qualifications and experience and not on any other demographic factors. Doing so allows all candidates to come into this initial stage of most recruitment processes on a level playing field. Reviewing CV’s in such a way will allow you to remove any of those unconscious biases that may cloud your judgement on an applicants ability to perform in the role. Recruitment is often a timely process, you need to invest your time wisely at this initial stage to ensure that you are inviting the correct calibre of candidates to that next stage based upon their talent and ability to conduct the role.

4 - Consistency in the interview structure

Whilst I’m not suggesting you sit opposite each candidate and reel off a set of robotic-like questions, you do need to have a consistent approach. Every candidate interviewed, needs to be extended an equal opportunity to shine. Conversations will always take a unique direction according to the individual's response but the basis of your questions must adopt some form of standardization to deliver equal opportunities to all and minimise any potential bias.

Building a work-related test into your interview process can be a great way to ensure you are making judgements based on a candidates ability to perform the task. At the end of the day, the whole purpose of engaging a recruitment process is to appoint someone to your team to undertake a certain task. Ignoring bias may well mean you recruit “a great person”, someone you feel connected to and share similar interests with but can they do the job?. Tests provide a great level platform on which each applicants performance can be judged on merit, carrying no unconscious bias whatsoever

Does your business have a Diversity and Inclusion policy?  You can download one from ACAS here if not.  It’s always a good idea to set diversity goals for your business. These will need to be carefully thought out, taking particular caution to ensure they are not simply a few Pie in the sky thoughts or actions which are simply seen to tick a box. These should be goals that are set and communicated through the business to relay a positive message to all current and future employees. Remembering, of course, to ensure these goals are reviewed regularly and after every recruitment campaign

It's time to be conscious of the unconscious

Any kind of bias undoubtedly has the potential to negatively impact a recruitment process. Not always intentionally, but we are at risk of potentially missing out on the very best candidates for the role by allowing such biases to play a part in recruitment. Recruitment should always be about recruiting the best candidate for the role. Eliminating any form of bias from the process will ensure you recruit the very best talent, creating a diverse, productive and successful workforce.  It's down to us all to raise our consciousness of our unconscious biases.

Do you have a certain way you tackle your own "Unconscious Biases" when it comes to recruitment?, we would love to hear from you if you are happy to share your experience.